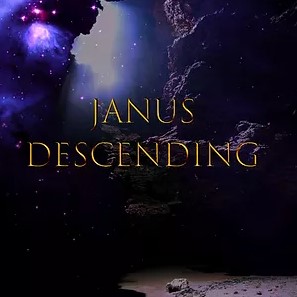 We’re moving from fun fantasy to abject horror with this episode’s sole feature: Janus Descending, by No Such Thing Radio.

Janus Descending follows the stories of Peter and Chel:  two xenoarchaeologists who launch an expedition to survey a small planet in a binary star system.  Their focus is on the remains of an alien civilization.  They soon realize that the monsters who destroyed that civilization still lurk in the ruins…and scientific discovery is fast forgotten as Peter and Chel find themselves in a game of cat-and-mouse, with their own lives in the balance.

Jordan Cobb created and produced this high-suspense story; she also plays Chel.  Cobb’s creativity is in full force with the twin narratives of the story.  Peter tells the story backwards, from its conclusion to its beginning.  Chel relates the horror to us from beginning to end.  Unfolding the story this way only adds to the fear, shock, and surprise at every turn.

An experienced, well-polished cast enhances the tension in each chapter.  Cobb has a long list of stage and screen credits, and you’ve heard her on the sci fi dramas Marsfall and We Fix Space Junk.  She’s also passionate about the potential of audio dramas, with no less than five more distinct series in the works from her production companies.  Meanwhile, Peter is played by A.R. Olivieri, whose resume is also long and impressive – including starring roles in 2298 and Magic King Dom.

A word of warning:  the horror is sometimes explicit.  There are descriptions of violence, gore, and psychological breakdowns.  Jordan Cobb wrote Janus Descending for a mature audience.  Listener discretion is advised.