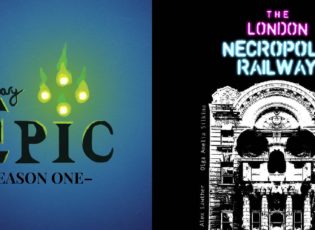 Hello and welcome, audio drama adventurers! Last time, we were treated to the first three episodes of London Necropolis Railway, along with The Ordinary Epic, Episode 1: The Group. If you couldn’t get enough of them, don’t worry – neither could we! So coming up this show is the rest of LNR’s first season with Episodes 4-7, and another installment of the Ordinary Epic with Episode 2: The Dip. Like last time, we’re kicking things off first with London Necropolis Railway. The show is a part of the Swedish project THE OTHER SIDE which is a multi media project aimed at young adults to help END_OF_DOCUMENT_TOKEN_TO_BE_REPLACED

Welcome back! It’s another show of new stories as we welcome two new friends to the show, with a short SCIENCE lesson in between. Are you prepared to explore the ghostly train station of the Necropolis Railway? How about questing with a new group of friend on a not-so Ordinary Epic? It’s time for some adventure with weird and wonderful things! First things first – we’re going underground to find out more about this mysterious Underground of London in Hillevi Gustafson’s “London Necropolis Railway”. The story is inspired by the actual Necropolis Railway of the 1800s, which transported dead bodies out of London for burial END_OF_DOCUMENT_TOKEN_TO_BE_REPLACED