Episode 365 – Death’s at the Door (but Nobody’s Answering) 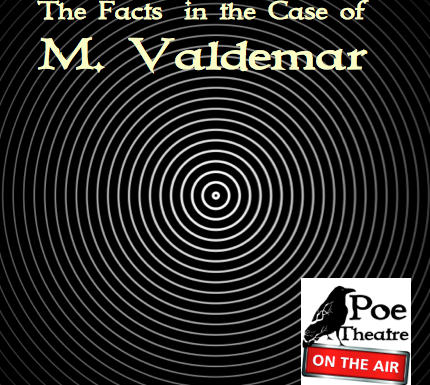 We’re back with another host of haunting stories for Halloween month, returning to the mysterious asylum in which the Poe Theatre on the Air stages tales from their namesake master of the macabre.  The premise:  many of Edgar Allan Poe’s familiar characters have taken up residence in the asylum for treatment.

In early 2019, Poe Theatre began producing adaptations of the works of Edgar Allan Poe as original audio drama productions, first heard on radio via WYPR in Baltimore.  Their commitment and dedication to these works — including live performances and educational programs — has received acclaim from the theatre community and the 2020 Hear Now Festival.  Most recently, the Library of Congress selected them as part of the nation’s Podcast Preservation Project, declaring the Poe podcast “an important part of the cultural and historical record.”

You’ll understand how true this is over the next half hour, as you listen to the mesmerizing tale “The Facts in the Case of M. Valdemar.”  It’s Edgar Allan Poe’s deep and brooding answer to two questions:  what if you could find a way to keep death from coming to collect – and if you did, how long could it stay that way?

After the heaviness of Poe’s dark musings, we’ll lighten things up a bit with The Scary Dead.  This send-up of the zombie genre comes to you courtesy of the jolly jesters at It’s All Been Done Radio Hour.  The series starts with the usual trope of the world in the grip of a zombie outbreak.  We’re dropped into the middle of two groups of survivors at odds with each other.  Despite the dangers of the undead, these people are still…well, people, with all their crazy foibles.  The comedic complications arise in chapters eight and nine of The Scary Dead:  “Gather Round the Fire” and “Descent Into Chaos.”