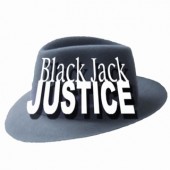 January means one thing around the hallowed aisles of Midnight Audio Theatre:  our annual January Jack Justice jubilee!  The Sultan of Sleuthing is one of – if not our most – popular features.  Every year, we receive requests to relay more adventures of this delightfully daring detective.  Who are we to deny you such aural excitement?

This episode is but the first of four featuring fulfillment of fans’ forensic fantasy!

In “Home Fires,” a couple of hundred pounds of strapping small-town lawman is distracting the heck out of the Girl Detective, so it looks like it’s down to Ol’ Square-Jaw to keep justice rolling.  Then, “The Rat Trap” tries to present a-day-in-the-life…a day when the problems strolling through the grey-green doors of Justice & Dixon are those of simple people with simple solutions.  Except this isn’t going to be one of those days for our detective duo.

These are produced by our pals at Decoder Ring Theatre, who have doled out audio adventures that harken to the Golden Age of Radio for over a decade.  They continue to produce mainstays Black Jack Justice and The Red Panda, along with occasional miniseries and guest writers’ works.  They’d just released a new batch of Red Panda chronicles about 1930s Toronto as we wrote this.  Check out all the Decoder Ring offerings at https://decoderringtheatre.com/shows/ .