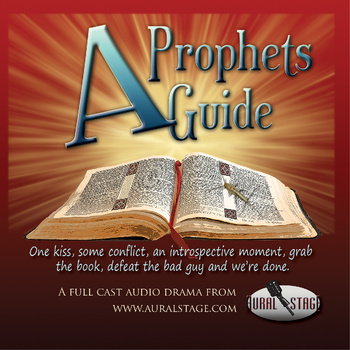 Hey there, audio drama fans!  If you tuned in last week, you heard me talk a little about the HEAR Now Audio Festival.  Spinning off of that, for the next month or so we’ll sharing with you some of the many stories we heard at the festival – giving you both a taste of what was there and bringing some new faces to our show!

Tonight is our first full night of features , with a bit of comedy and horror in store – the latter is provided by The Theater in Your Mind Productions and their Mark Time Award-winning tale, “Clones in the Closet“. Before that, we have a more lighthearted tale from Aural Stage Studios entitled “A Prophet’s Guide“, also a finalist for the Mark Time Awards.  I met with Theater in Your Mind’s producer Jon Holland in person; he’s doing wonderful work and has a whole collection of additional stories on iTunes you should check out.  And Aural Stage Studios has recently turned non-profit with goals to engage the community of Buffalo, NY (where they’re based) in audio storytelling.  Both are fantastic groups, and we’re excited to have them with us tonight!

An added note, there are some crowdfunding campaigns for audio dramas that you should know about!  Aural Stage is working on a 12-episode series called Otherworldlies at Razoo, and has one week left of their campaign to raise what they need to produce it. Also, our friends at Atlanta Radio Theatre Company have a campaign on IndieGoGo for the CD release of “Blues for Johnny Raven”.  Please help these great production groups reach their goals!